MP Champions Manifesto For The North 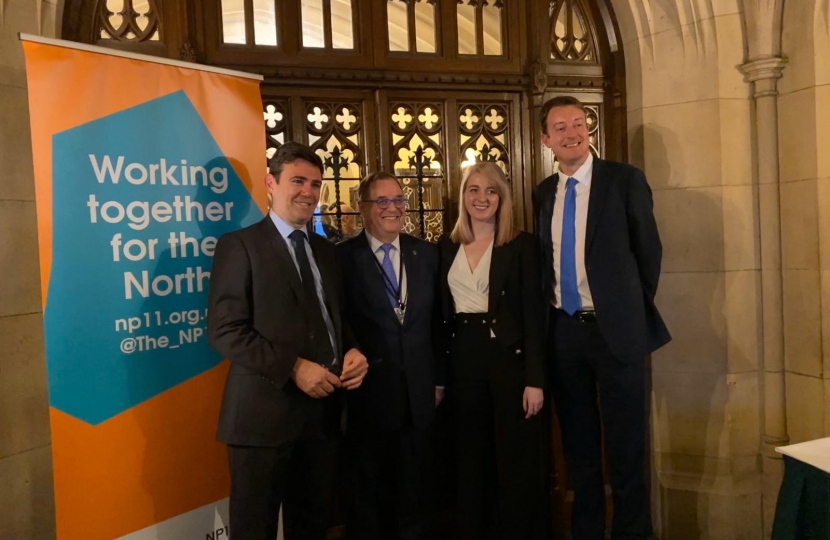 Local MP joins Political and business figures to discuss manifesto for the North as NP11 calls for budget for the North.

Yesterday the chairs of the Northern Powerhouse, NP11, met with government ministers and key regional politicians to discuss their manifesto for the North.

Speaking at the event Davsion said:

“I think the NP11 is absolutely crucial to bring together different cities and towns, but also different council areas and political persuasions. It is great to see the new energy in the North since the election  and we are determined to use this momentum to ensure we level up across the North and the rest of the UK.”

Launched in July 2018 the NP11, comprised of 11 Local Enterprise Partnerships (LEPs), plays a leading role in realising the vision for the Northern Powerhouse. Their newly launched manifesto provides a Northern lead approach to transform and grow local economies, part of this investment included proposals for £40m investment in a green revolution to develop a Net Zero Carbon emission programme in the North.

“Our Government has rightly recognised the North’s central role in levelling up the national economy following the UK’s departure from the EU," said Roger Marsh, chair of the NP11 board and Leeds city region local enterprise partnership.

We’re now calling on the Government to show the extent of this commitment by ensuring that it's Budget on 11 March is a budget for the North.

In particular we need further investment into some of the North’s most promising developments and sectors, which include clean energy, transport infrastructure, and trade and investment opportunities."

You can find out more information about the NP11 below.

The Prime Minister has today progressed our Coronavirus response, meaning there are a few changes to what we should do if we feel unwell.

IF YOU HAVE EITHER A NEW CONTINUOUS COUGH OR A HIGH TEMPERATURE YOU SHOULD STAY AT HOME AND SELF-ISOLATE FOR 7 DAYS.