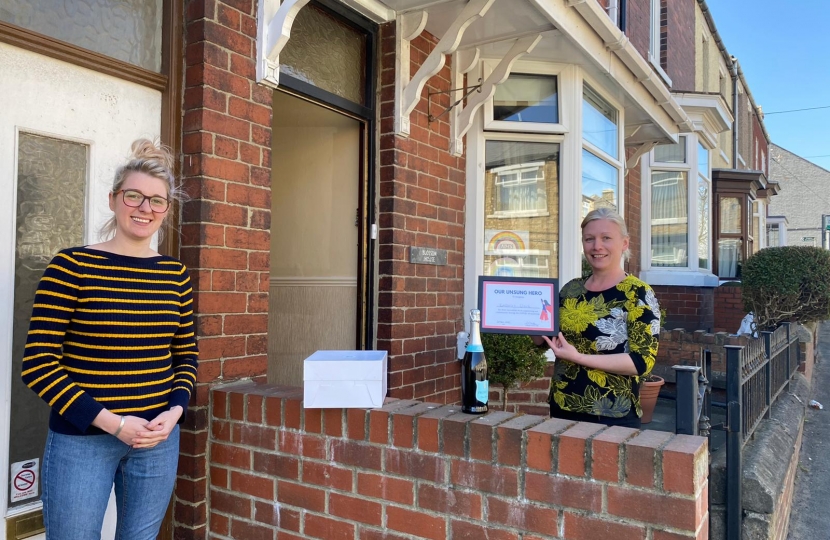 A local caterer who has made more than 6,000 meals for the vulnerable named first Unsung Hero by Bishop Auckland MP.

Kimberly Clark, from Evenwood, was awarded the first Unsung Hero award on Friday after receiving over 20 nominations from local residents. The scheme, announced by local MP, Dehenna Davison, just over two weeks ago aims to honour those who are going above and beyond to help people affected by COVID-19.

Dehenna delivered a contactless prize to Kim on Friday afternoon, which included a bottle of bubbly, a Brownie Stack Cake from The Hedgehog Bakery in Staindrop, and a framed certificate.

Dehenna said: “So many amazing key workers, NHS and social care staff are working tirelessly to care for our loved ones, some directly on the front line of our fight against the virus.

“There are also hundreds of people in our community going above and beyond to do what they can to help, and so many people contacted me about the amazing work their neighbours or local business area doing. I wanted to show my appreciation for them too, which is why I set up the scheme.

“Kim received an incredible number of nominations, and hearing of how incredibly hard she is working to provide meals for those in our community, it was a no brainer to give her this award. She is absolutely fantastic!”

Amongst the nominations, people said Kim deserved the award because, “She works relentlessly making sure our NHS, key workers, elderly and vulnerable in the local community get access to free home cooked meals and treats for no personal gain. She is truly amazing!” and “Kimberley has gone above and beyond feeding the community and key workers. She has given herself a target and is half way there. She is truly amazing and deserves to be recognised for her generosity”.

The Unsung Heroes scheme will see a new hero announced every Friday of lockdown. Nominations for that week are open until 5pm on Thursday.

To keep up to date with everything Dehenna is doing, check out-

Bishop Auckland MP, Dehenna Davison, asked the Prime Minister to back her calls to reject the £3,000 MP Pay rise.