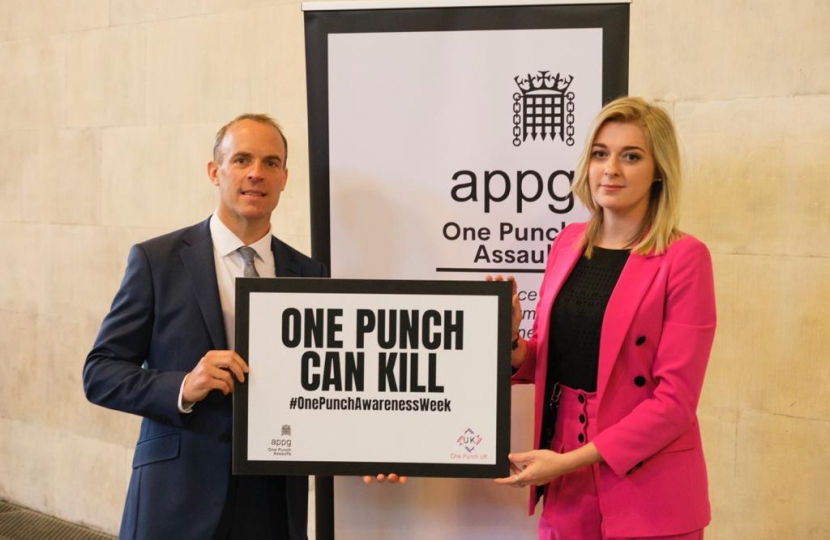 Chair and founder of the All-Party Parliamentary Group (APPG) on One Punch Assaults, Dehenna Davison MP, raises awareness of the damage one punch assaults can cause.

On Wednesday in Parliament, Dehenna Davison MP for Bishop Auckland, raised awareness of the damage One Punch Assaults can cause and called for peers and the public to join her campaign during One Punch Awareness week.

Impacted herself from a one punch assault having lost her dad at aged 13, Dehenna Davison has said that her route into politics stemmed from this tragedy and since her election has been working to change the law around sentencing to provide better support for families of victims.

“A lot of the reason why I am standing in this Chamber today follows a chain reaction of events following the death of my father from a single-punch assault, but my dad is just one of many victims, which is why this week we are marking One Punch Awareness Week. May I ask the Deputy Prime Minister if he will join me in showing his support for One Punch Awareness Week, and can I extend an invitation to him, and indeed to all colleagues right across the House, to join me immediately after PMQs in Westminster Hall to show that support?”

Dominic Raab, who is representing the Prime Minister whilst he is away meeting with the G7, replied:

“I know that hon. Members across the House will be very proud of the tenacious way she is pursuing that campaign. Of course I will join her in Westminster Hall, and I would encourage all Honourable Members to do the same.”

Cross party MPs, including the Deputy Prime Minister Dominic Raab, Labour’s Florence Eshalomi and Anum Qaisar-Javed, joined Dehenna at her drop-in session, to raise awareness of the damage and danger of one punch assaults.

The One Punch APPG, set up in February this year, is currently hearing holding an inquiry into one punch assaults, hearing from victims’ families, persecutors and law makers, for a wider report into sentencing around and how the justice system can better support families who have sadly been affected.