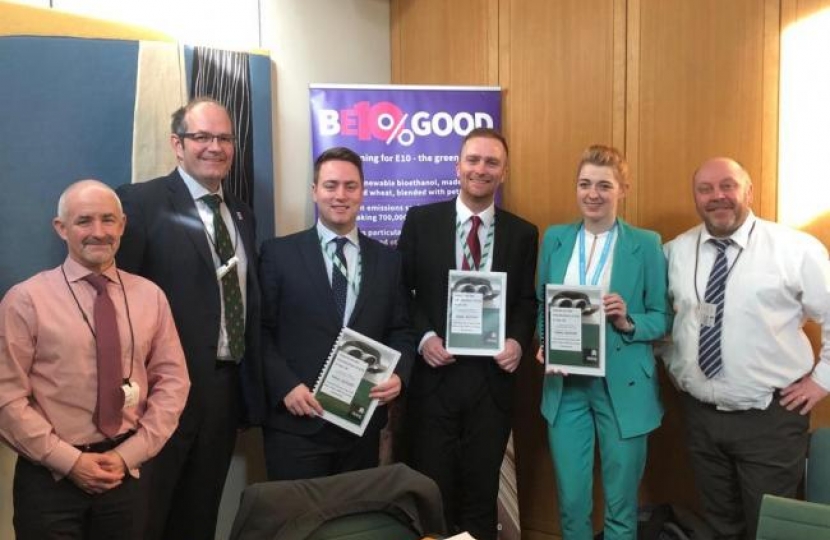 Today in Parliament, MPs from across the political and geographical divide reconstituted the All Party Parliamentary Group for British Bioethanol at its annual AGM. The AGM saw the election of two Co-Chairs, Matt Vickers MP for Stockton South and Dehenna Davison MP for Bishop Auckland, whose constituencies rely on the bioethanol industry both for employment and in supporting the local economy in the North East of England.

Kicking off the work of the APPG, the new Co-Chairs wrote a joint letter to the Secretary of State for Transport requesting an urgent meeting to discuss how E10 can be introduced at forecourts across the UK in 2020.

Ensus, the bioethanol producer with headquarters in Mr Vickers Stockton South constituency, faces an uncertain economic future if E10, a greener petrol, is not mandated by the Government by the end of 2020. The new greener fuel called E10 would have a bioethanol blend of 10%, compared to the current limit of a 5% blend called E5 which is presently available at the pumps. Vivergo Fuels, another bioethanol producer based in Hull, was forced to mothball its production plant in late 2018.

2019 was a breakthrough year for the APPG for British Bioethanol. As well as hosting a Westminster Hall Debate attended by 25 MPs, the APPG’s parliamentary inquiry into the introduction of E10 garnered national news coverage. The APPG also successfully defended the industry from collapse in the event of a No Deal Brexit, with the Department for International Trade heralding bioethanol as “important to critical national infrastructure”.

Despite these efforts, the APPG for British Bioethanol continues to face the threat of collapse. Without the introduction of E10, investment will dry up and bring with it the loss of hundreds of jobs in the North East and see the collapse of an industry worth £1bn to the UK economy.

Signing the register to reconstitute the APPG at its Annual General Meeting in Parliament, Matt Vickers, MP for Stockton South and Co-Chair of the APPG said:

“I’m very proud to have been elected as Co-Chair the APPG for British Bioethanol. Many of my constituents’ livelihoods depend on this crucial industry, which will only survive if E10, the greener petrol, is mandated at the forecourts before the end of 2020. The introduction of E10 would bring with it countless benefits for people across the country, including further investment in the next generation of biofuels. I look forward to working with the Government as it looks to showcase its support for industry in the North East of England, alongside its commitment to bring us down to net-zero carbon emissions by 2050.”

“As Co-Chair for the APPG for British Bioethanol, I am proud to support an industry that’s vitally important to my constituents in Bishop Auckland, and for people right across the North East. I will be working with my Co-Chair, Matt Vickers, to encourage the Department for Transport to make E10 available at the pumps as soon as possible in order to both support the British economy and protect the global environment. As such, we encourage the DfT to publish its Consultation into E10 at the earliest opportunity.

“As the Government looks forward to COP26, introducing E10 would be a strong and effective way of both decarbonising our vehicle fleet and supporting British farmers in cutting down their carbon footprint and reliance on imported soya-based animal feed, which has caused widespread damage to the world’s rainforests. I believe that the introduction of E10 will also further highlight the UK’s commitment to global leadership in protecting the environment for all future generations.”

“Using this greener fuel would be like taking 700,000 cars off the road, and with increased sales of petrol cars in 2019, making the petrol that they use greener would provide immediate benefits to our environment on the long road to net-zero emissions by 2050. Further delay will only risk the collapse of an industry at the expense of hundreds of jobs, and all of the benefits that E10 would bring to farmers and members of the public alike across the United Kingdom.”