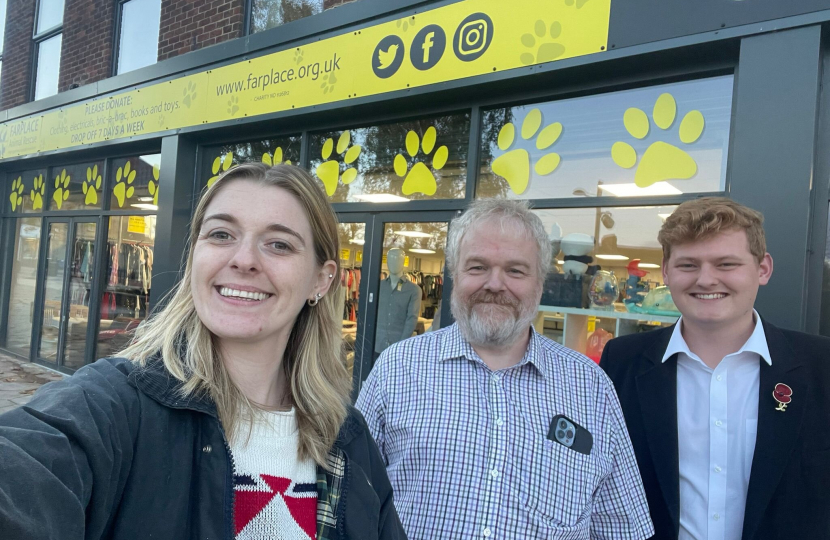 Opening in September, the charity is one of many new businesses and organisations to join along Festival Walk.

Farplace Animal Resuce have been praised for their work, helping animals rejected elsewhere and creating a network of no kill rescue centres. Alongside their animal rescue work, the charity has recently won a Kickstart Award, for their support to get young people into employment as part of the Government’s £2 billion Kickstart Scheme. The Kickstart Scheme, launched in September 2022, provides funding to create new jobs for 16- to 24-year-olds on Universal Credit who are at risk of long term unemployment.

“It was great to head over to Spennymoor last week, with Cllr Luke Allan Holmes, to meet Gareth, Mark and the team to see the new Farplace Animal Rescue retail unit that opened last month.

Having joined the Kickstart scheme, introduced by the Government earlier this year to help create new jobs for 16- to 24-year-olds on Universal Credit who are at risk of long-term unemployment, Farplace Animal Rescue have won a Kickstart award for their work to support young people in the community.

“It is so good to see progress being made along Festival Walk, with tenants moving into the new units. I look forward to keeping in touch with Gareth and hearing about all the work they will continue to do.”

"Progress is finally being made at Festival Walk and tenants are moving into the new units. It’s great to see charities, who do amazing work day in and out, moving into our town to take advantage of the opportunities available.

"I look forward to Greggs returning to our town and seeing further progress of the transformation project which will give our town centre the boost it needs."