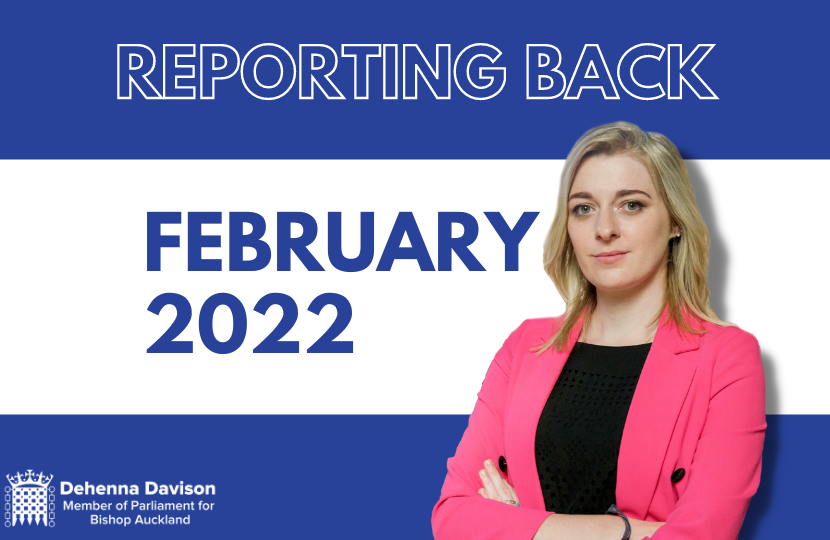 Despite being the shortest month of the year, February has proved to be very busy.

Kicking off the month, I attended the LNER Parliamentary drop-in session. An opportunity for all MPs of any party to swing by and meet staff from LNER and other companies that keep our railways going. Whilst there, I raised concerns about problems with the new parking system at Darlington Station, and also about the recent lengthy delays in services to London, which a number of you have contacted me about. It was great to see their ‘Be Kind’ badges, which are a part of their campaign to tackle the rise in anti-social behaviour on their network.

The Government released their Levelling Up White Paper this month, and it features some really exciting news for County Durham. The Government’s plans for the ‘devolution revolution’ will see more powers moved out of Whitehall and County Durham will be one of the first 9 areas to enter into formal negotiations under the new scheme. By 2030, local public transport connectivity across the country will be significantly closer to the standards of London, with improved services, simpler fares and integrated ticketing! And, as one of 55 areas across the country identified as an Education Investment Area, County Durham will receive both targeted support and prioritisation for new specialist sixth form free schools – ensuring that talented children and young people from disadvantaged backgrounds have access to the learning they need to progress into training or higher education. And all this is on top of the £33.2m, £20m, and £19.9m Bishop Auckland has already been granted through the Towns Fund, Levelling Up Fund, and Future High Streets Fund respectively since 2019.

February also marked the hugely successful National Apprenticeships week, and I was delighted to welcome the Minister for Skills, Alex Burghart, to meet the fantastic Brenda and the Purple People Academy Apprentices at Learning Curve. It was an incredible way to mark the end of such an important week.

Over the recess I got to spend time out and in the patch, catching up with local businesses like Headlam Hall Hotel and Spa and a fantastic bakery, Coghlans Barningham. Alongside a few visits, I held one of my regular surgeries with constituents, taking on casework and doing what I can to help.

Our area was once again hit by a few storms, with storm Eunice causing havoc with the trains and trees. Following from Storm Arwen late last year, I and colleagues across the North East have been in regular communications with Government and the Business, Energy and Industry department to ensure that the necessary steps are taken to ensure that our areas are ready for any future storms.

Like many of you, I am deeply concerned about the ongoing invasion of Ukraine. Developments over the last weekend of February were hard to watch and deeply harrowing.

When in the chamber I called on the Prime Minister to continue to do all we can to support the people of Ukraine. The UK Government have led the way in assisting Ukraine. We are sending £40m of humanitarian aid, to help provide vital medical supplies and assistance to Ukraine, widening economic and military support to bolster the Ukrainian resistance to the Russian invasion.

To me, Britain as a nation is the definition of freedom. We have a duty to always defend freedom and never give in to those who threaten to take it from us. I hope I can speak on behalf of all of us when I say that Bishop Auckland, and the United Kingdom are with Ukraine.