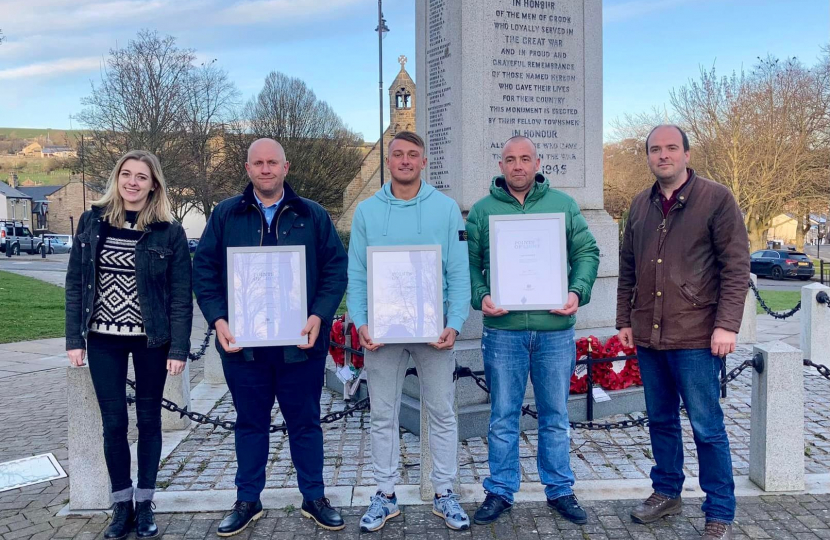 Alongside constituency neighbour Richard Holden MP, Dehenna Davison, member of Parliament for Bishop Auckland has presented three constituents a Point of Light Award to recognise their heroic efforts to save someone at their most vulnerable.

Lee Gustard, from Crook, and Paul Aldsworth and Oscar Eckley-Aldsworth both from Bishop Auckland, have been recognised by the Prime Minister in his Point of Light Award Scheme after they stepped in to save a local resident at their lowest on the Newton Cap Viaduct.

Father and son, Paul and Oscar, were first to pass by and stop to help, and were shortly after joined by Lee. The trio bravely held the man’s full body weight, whilst being under immense physical strain themselves, until the emergency services arrived at the scene. Following their actions in saving the life of a stranger, the trio are now hoping to help the campaign for enhanced safety measures on the viaduct, which dates back to 1857 and carries the A689 over the River Wear.

“When I heard about the heroic actions of Paul, Oscar, and Lee, I contacted the Prime Minister to make him aware of their heroism, and so I am absolutely delighted they are getting the national recognition they deserve through a Points of Light Award.

“These three heroes went above and beyond, putting their own lives at risk to save a complete stranger at his most vulnerable. They show the absolute best of our community.”

“I speak for everyone in North West Durham when I say that we are so proud of Lee: there is no doubt in my mind that his brave actions saved this man’s life at Newton Cap Viaduct.

“Alongside Paul and Oscar Aldsworth, Lee had the presence of mind to act decisively, calmly and courageously, putting himself in immense personal danger, for the sake of someone that was until that point a stranger to him. I am so glad that Lee was there. All three of them deserve all the praise local people have shown them, as well as the recognition they have been given with this Points of Light Award and the personal commendation given by the Prime Minister himself.”

“We are very proud to receive this prestigious award but we simply just found ourselves in the right place at the right time. We only did what any other person would have done. It was our natural reaction that we helped someone who needed help because it was the right thing to do. The emergency services are our ‘points of light’ every day in all our communities.”

“There truly are no words to describe how grateful I am for receiving this award. For me it was just a normal night driving home from work. Under the saddest circumstances I have gained two friends for life in Paul and Oscar. I wouldn’t hesitate to do it again. Mental health, especially in men, needs to be normalised so situations like this can be prevented.”