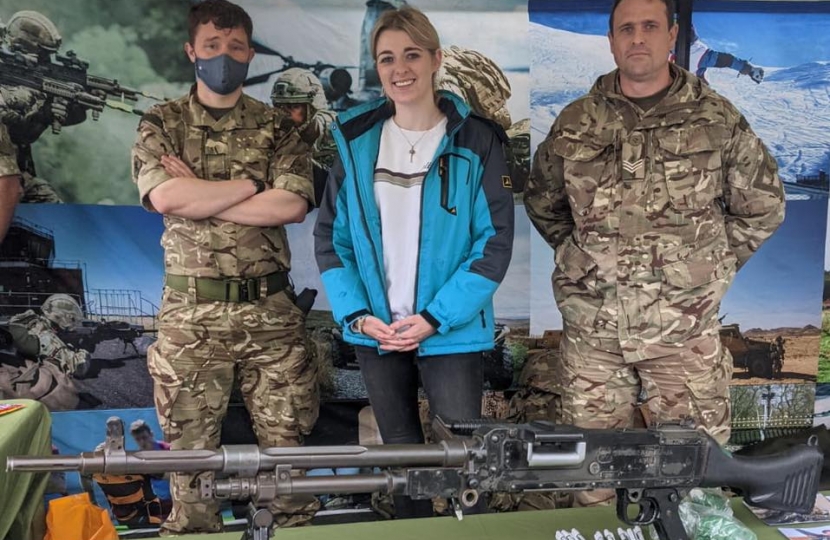 Bishop Auckland FC welcomed members of the public to their grounds this weekend as it hosted this year’s Armed Forces Day event.

Organised as a part of activities to mark Armed Forces Day, an annual event to show support for the Armed Forces and bring a much-valued morale boost for the troops and their families. Hundreds of residents turned out despite the weather to attend and mark the occasion, as well as Bishop Auckland MP Dehenna Davison who also joined the crowds to mark the day.

Whilst there Dehenna Davison MP said:

“I had a great time at the Armed Forces Day event at Bishop Auckland FC meeting servicemen, veterans, and armed forces charities. I even had the opportunity to try out carrying a 32kg rucksack. Despite the grin on my face at the time, I’m not sure I’m quite cut out for it just yet!

“It was great to see so many out to celebrate Armed Forces Day, recognising the fantastic work those in the armed forces do and the sacrifice those who have served have made. I once again pay my heartfelt thanks to our servicemen and veterans, and all those supporting our Armed Forces, for their role in keeping our nation safe.”

Earlier this year the Government renewed the Armed Forces Act 2006, enshrining the Armed Forces Covenant in law and helping prevent service personnel and veterans being disadvantaged when accessing services like healthcare, education and housing.

Attendees were able to enjoy fairground rides, dog shows, craft stalls and more. Whilst there, Dehenna Davison toured the stalls, including the Armed Forces recruitment stalls, trying out their exhibits and speaking with personnel.