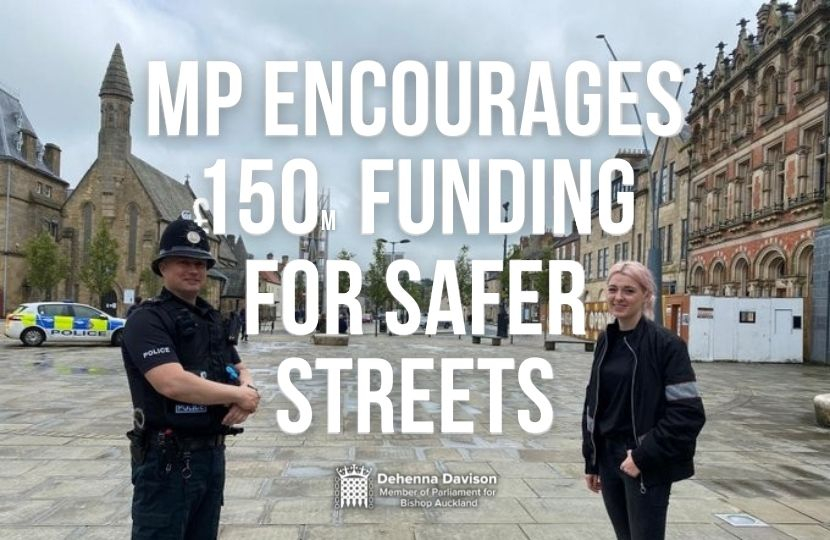 Dehenna Davison MP is encouraging Durham Constabulary to bid for a share of the £150 million funding that will be made available in the fourth round of our Safer Streets Fund.

The fourth round will run over the next three financial years for police and crime commissioners and local authorities across England and Wales, as well as certain civil society organisations. This is on top of the £70 million already committed by the Government to the Safer Streets Fund.

The Safer Streets Programme provides funding to areas most affected by crime and anti-social behaviour and will allow local authorities, civil society organisations and police and crime commissioners to bid for up to £500k per year for each project. The latest round of the fund targets neighbourhood crime, violence against women and girls and – for the first time – anti-social behaviour.

Projects from previous rounds of funding have made a huge impact on local communities. Funding has been used to improve the security for thousands of homes that were vulnerable to burglary with alleyway gates installed to prevent an easy escape for offenders.

Other projects across the country have focused on setting up neighbourhood watch groups, increased CCTV and introducing wardens to undertake community engagement and train members of the public in crime prevention – demonstrating levelling up in action.

The Safer Streets Fund builds on our existing measures to keep our streets safe from the Conservative Government, including: more than 11,000 police officers recruited across England and Wales, investing £17 billion in the police, and targeted stop and search powers to tackle crime and protect communities.

We encourage all police forces and local authorities to apply for the fourth round of funding that will have a transformative effect on the safety of people in their local communities.

“I am determined to see crime in our community fall, which is why I am encouraging Durham Constabulary to apply for new funding from the fourth round of our Safer Streets Fund.

“The focus of this round of the Safer Streets Fund on neighbourhood crime, violence against women and girls, and anti-social behaviour means that along with the 20,000 new police officers we are recruiting across England and Wales, everyone can feel safe in their local community.

“This is another important step in our mission to level up the country and build back safer from the pandemic.”

“Our local communities are the beating hearts of the UK and I want our streets to be safe for everyone to go about their daily lives without fear inflicted on them by criminals.

“The Safer Streets fund improves the safety and security of areas blighted by crime and helps the police and local councils ensure that everyone is safe on our streets, going to the shops, seeing friends. It also prevents potential perpetrators committing such crimes in the first place so our communities are able to flourish.”

“As well as being tough on criminals, we need to outsmart them where we can, preventing their crimes. The Safer Streets Fund does exactly that, giving neighbourhoods the money they need to ‘target harden’ their homes and streets, outfoxing villains and making them think twice before offending.

We want everyone to feel safe in the public space, and as we build safer streets, town by town, I hope that we can restore pride, alongside safety, as something people say about where they live.”

Elected in 2019, Davison was appointed Parliamentary Under Secretary of State at the Department for Levelling Up, Housing and Communities on 7 September 2022.

On her appointment, Dehenna said: