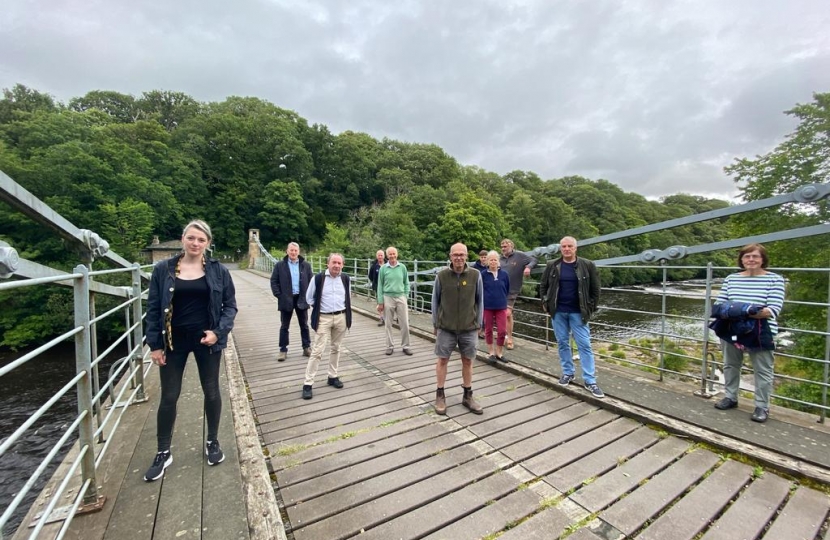 Durham County Council have today announced the full closure of Whorlton bridge after their report has shown the structure is “unsafe” to support live loading. This closure will see pedestrians unable to access the bridge, where previously only vehicles were unable to cross the bridge. The closure of the bridge has left many residents of Whorlton, Wycliffe and Thorpe without a key connection to each town, and some even blocked off from family.

In a letter to Durham County Council, Dehenna Davison MP has called for “immediate repairs” to be made to the key transport link between Whorlton, Wycliffe and Thorpe after over a year of closure. Posting the letter to social media, the local MP said, “Over the summer I met with residents of Whorlton to discuss how the closure of the bridge has impacted their lives. I know that the complete closure of the bridge, whilst necessary for resident’s safety, will leave many without quick access to loved ones. Rather than a short drive, residents will now have no choice but to take the long detour to get across the river.”

The grade 2 listed bridge, dating back from around 1831, is the UK's oldest road suspension bridge with the deck totally supported by its original iron chains. Despite modifications to strengthen it, weight restrictions have meant only one vehicle could to use it at a time and regular safety inspections are required. Today the Council has announced the bridge will now be shut off to pedestrians, as well as vehicles, until February 2021.

The Council’s investigations suggest the hanger failure, which was the original damage identified, appears to not be an isolated issue and inspections have suggested that other hangers are also close to failure. There are concerns that this deuteriation could cause one catastrophic event rather than a progressive decline, the bridge’s incapability of supporting its own deadload has meant Durham County Council have found little justification to keeping the structure open to any users.

Speaking to residents in light of the news, Mrs Peat a resident of Whorlton for 45 years said:

“The total closure of the bridge for such a long time is a disaster for local residents, walkers and cyclists. It is on a very popular Sustran cycle route and forms an important part of a busy, popular, circular walk, apart from being a vital link connecting families and friends on opposite sides of the river.

“It is imperative that the repairs to the bridge are conducted with all possible speed to minimise the disruption to our lives, even if that means that it can only be used for cyclists and pedestrians in the future.  Alternatively, a temporary strengthening of the bridge structure such as they did for the almost identical suspension bridge near Berwick on Tweed might be considered.”

“I cannot understand why it has taken nearly 18 months to have available the results of a draft survey of the condition of the bridge. A lot of people have accepted the inconvenience of vehicular closure on the now unfounded assumption that the necessary work was being done to prepare for the repair of the bridge.

“For my own part the total closure will be extremely inconvenient. I walk over the bridge almost every day to visit and provide care for my elderly mother who lives in Whorlton. This has been especially important in the pandemic. Now it is a round trip of around 15 miles by road.”

“This news will come as a huge blow to many residents. Whilst I am glad that the Council have concluded their investigations and should soon be publishing the report on Whorlton Bridge, my focus is on making sure these repairs are done as soon as possible to re-connect communities.

“It is completely ridiculous the bridge has been closed without any indication of when it will be repaired, and we must get these repairs done immediately. We are well over a year into the closure of the bridge for cars and this latest development has left many like myself saying enough is enough.  I have written to Durham County Council and will remain in close contact with them to ensure we deliver for the sake of local residents.”