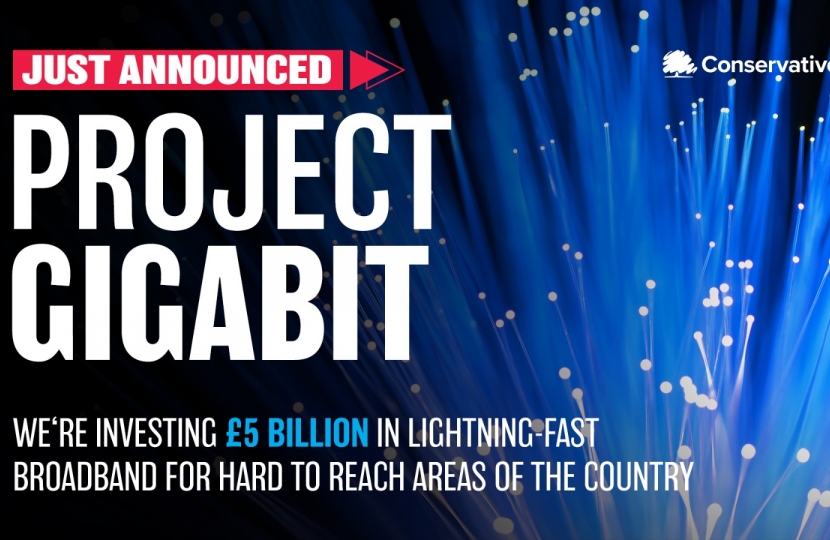 The constituency of Bishop Auckland is set benefit from the Government’s Project Gigabit, launched today.  The new £5 billion scheme will bring the fastest broadband on earth to hard to reach areas.

More than one million hard to reach homes and businesses will have next generation gigabit broadband built to them in the first phase of a £5 billion government infrastructure project.

Up to 510,000 homes and businesses in Cambridgeshire, Cornwall, Cumbria, Dorset, Durham, Essex, Northumberland, South Tyneside and Tees Valley will be the first to benefit as part of ‘Project Gigabit’.

Their available speeds will rocket to more than 1,000 megabits or one gigabit per second. It means families no longer having to battle over bandwidth and will give people in rural areas the freedom to live and work more flexibly. Contracts for these first areas will go to tender in the spring with spades in the ground in the first half of 2022.

In June the government expects to announce the next procurements to connect up to 640,000 premises in Norfolk, Shropshire, Suffolk, Worcestershire, Hampshire and the Isle of Wight.

The government-funded projects will prioritise areas that currently have slow connections and which would otherwise have been left behind in broadband companies’ rollout plans.

Gigabit broadband is being rolled out rapidly - from one in ten households in 2019 to almost two in five today. The UK is on track for one of the fastest rollouts in Europe and for half of all households to have access to gigabit speeds by the end of this year.

Project Gigabit will accelerate our recovery from covid, fire up high growth sectors like tech and the creative industries and level up the country, spreading wealth and creating jobs the breadth of Britain.

The successful Gigabit Broadband Voucher Scheme is also being relaunched with up to £210 million to give people in eligible rural areas immediate financial help to get gigabit speeds.

On top of this the government is making up to £110 million available to connect public sector buildings - such as GP surgeries, libraries and schools - in the hardest to reach parts of the UK with this revolutionary infrastructure.

Improving local access to broadband was a key campaign pledge. It is something I have been working on since being elected, both locally, holding roundtables with, EE, BT and other partners, and joining with residents to meet with Digital Durham, and nationally, raising residents’ broadband issues in Parliament. I am committed to improving local connectivity and it is great to see a shared commitment from the Government.

Today’s announcement of ‘Project Gigabit’ is absolutely fantastic news for many local residents. Working from home for the last year has exposed the inequalities in access to good internet and I am so pleased we are one of the first places to benefit from this scheme.

“Project Gigabit is the rocket boost that we need to get lightning-fast broadband to all areas of the country. This broadband revolution will fire up people’s businesses and homes, and the vital public services that we all rely on, so we can continue to level up and build back better from this pandemic.”

“Project Gigabit is our national mission to plug in and power up every corner of the UK and get us gigafit for the future.

“We have already made rapid progress, with almost 40 percent of homes and businesses now able to access next-generation gigabit speeds, compared to just 9 percent in 2019. Now we are setting out our plans to invest £5 billion in remote and rural areas so that no one is left behind by the connectivity revolution.

“That means no more battling over the bandwidth, more freedom to live and work anywhere in the country, and tens of thousands of new jobs created as we deliver a game-changing infrastructure upgrade.”

“We’re already building Full Fibre broadband to 20 million homes and businesses under our own steam - including in rural and hard-to-reach areas – and we welcome this as a vital next step to connect the toughest parts of the UK.

“We’ll be considering these proposals for the final 20% with interest and we’re keen to support the Government. This is a massive opportunity to level-up the country and boost the bounce-back after the pandemic, so it’s important the process moves quickly and that all operators do their bit.”

“Project Gigabit is another welcome accelerant that will propel the UK towards a Full Fibre future, supporting economic growth and levelling up opportunity right across the country. As the nation’s largest independent Full Fibre platform, with a build programme underway to a third of the UK market, CityFibre is ready to extend our network even further to reach rural communities. We look forward to participating in this important programme to ensure no one is left behind.”

“As a rural operator already delivering multiple ‘Superfast’ BDUK contracts, we are naturally delighted to see the next step in the development of the Outside In programme.

“We are fully supportive of the Government’s ambition to roll out gigabit capable connectivity across the country as quickly as possible, the importance of which has been further highlighted by the COVID pandemic.

“We look forward to playing an active role in meeting this ambition and will review these opportunities in detail.”

The government is today responding to its public consultation Planning for Gigabit Delivery in 2021 which sought views on how to spend its record £5 billion funding commitment for gigabit broadband in hard to reach areas.

It outlined a strategy to make local, regional and cross-regional contracts available for broadband network providers of all different sizes to bid for. The first procurements to be announced are:

On top of these six regional contracts, there will be further local supplier contacts in Essex and Dorset. This first release of procurement contracts for England follows central Scotland recently being named as the first area to receive Project Gigabit funding. The UK and Scottish government are discussing the potential for further Project Gigabit contracts in Scotland, which could be delivered alongside Scotland's R100 programme.

There are already major programmes delivering gigabit broadband in the devolved administrations, including R100 in Scotland and Phase 3 of the UK government’s previous superfast broadband programme in Wales. Project Gigabit builds on the £2.6 billion Superfast programme, which is now predominantly funding gigabit-capable rather than superfast connections.

In Northern Ireland, the UK government has invested £150 million in Project Stratum, which will connect approximately 76,000 homes and businesses to gigabit broadband. The first live connections under the scheme were delivered last week in County Tyrone.

Additionally between September and December 2020, the government approved a further £490 million in new contracts via the Superfast Broadband programme across the UK to connect a further 172,000 premises to gigabit in Scotland, Cheshire, West Yorkshire, North Yorkshire, Lincolnshire, North Lincolnshire, Devon and Somerset.

For rural homes and businesses across the UK currently struggling with slow broadband speeds, the government is investing up to £210 million to build on the success of its Gigabit Broadband Voucher Scheme.

Launched in March 2018, the scheme provided eligible areas across the UK with vouchers to cover the installation costs of bringing gigabit connectivity to people’s homes and businesses. So far more than 66,000 vouchers worth up to £127 million have been issued to premises across the UK.

The new vouchers worth up to £1,500 for residents and up to £3,500 for businesses will go live on 8 April 2021 and mean that rural areas will not have to wait for supplier contracts under Project Gigabit to reach them.

There will be a new online postcode checker available so people can check if their home or business is eligible for a voucher.

Project Gigabit will invest up to £110 million to connect public buildings such as rural schools, doctors’ surgeries and libraries to gigabit broadband. This will help GPs provide remote video consultations and allow whole classes of schoolchildren to be online at once with no interruptions.

The government wants to connect up to 7,000 rural public buildings in order to improve public services. They will act as hubs to get gigabit-capable networks into the heart of countryside communities and incentivise other broadband companies to build off them.

The Department for Digital, Culture Media and Sport (DCMS) continues to engage with local bodies and government departments to identify suitable projects, and expects the first of these to be progressed this summer.

The UK has some very remote places that may be too expensive to build a gigabit-capable broadband network to, even with substantial public subsidy.

Thanks to completed or pending government-funded projects, less than 0.3% of the country or less than 100,000 premises are likely to fall into this category.

For these premises, which are mainly located in remote and isolated locations in Scotland and Wales, and some National Parks in England, a call for evidence has been launched to explore the barriers to improving their broadband and how innovative new technologies might help change this.

This could lead to the government encouraging industry to use new wireless equipment, low-orbit satellites or high altitude platforms to beam faster connections to far-flung homes and businesses.

The government has already made investments in wireless, satellite and hybrid-fibre technologies, and continues to explore emerging technologies in this area. Some of these technologies are also gigabit-capable and eligible for UK Gigabit Programme funding today.